There's a tether from my heart to my family in Santa Fe. Buffeted by dry wind, hardened by the sun, brittle from snow, it endures.
Nourished by my dreams, fed from the font of shared memory, watered by laughter. It's a living thing.

As the daughter of a Spanish* Catholic and a Texan Baptist, I was introduced to both the self-flagellating Penitentes of New Mexico and the tent show holy-rollers of East Texas. In addition, my hometown of Santa Fe, the city of Holy Faith, is host to state politics and the attendant corruption, artists and their hangers-on, and a thriving tourist economy.
All of this went into my first book, The Sandoval Sisters' Secret of Old Blood . The issues confronted by three sisters are contemporary: racism, sexual and religious intolerance, and the power of superstition. Finally, it is a story of what constitutes a family, and the myths associated with the blood and bounds of loyalty.

A Short History of Names:

My grandmother was a Sandoval, and married a Gallegos.  My mother married the O’Briant.  My father was no sweetheart, but I’ve stubbornly clung to his name.  Growing up in Santa Fe, both my brother and I got the shit kicked out of us for having an Anglo last name.  Yet, my mother had proudly relinquished her own father’s Spanish surname because of the discrimination she experienced for being Mexican.  For her, an Anglo last name was a step up.  She had no idea her future children would experience reverse discrimination.

Hence, my cynical world view.
So, where did the Ramos come from?  I borrowed it from the slender, bookish part of a widely-traveled lesbian couple who took an interest in me, or my mother*, and gave us a subscription to National Geographic when I was ten.  Yes, the gesture and that magazine opened my mind to possibilities beyond the Santa Fe city limits, but I also wanted to proclaim my heritage, and not from the ground looking up, as I had once done with my childhood tormentors: “My mom is Spanish!”*

*Ms. O’Briant’s mother would like you to know she loves men.  Always has.  Always will.

*Read Mexican.  Spanish was the historically correct term in use in Santa Fe back in my getting-beaten-up days.  In my book, the characters are New Mexicans. 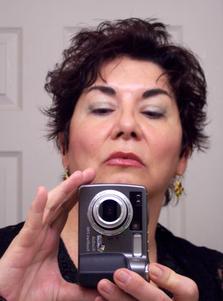 ​ I grew up in Santa Fe, New Mexico and spent summers in Texas with my dad.  Before my switch to writing, I was an executive recruiter in the legal field.

Love, Sex and Class: The Con Women in The Handmaiden

Joy, Happy Endings for the Holidays: A Review

The Homesman is a Woman

By the Way, Meet Vera Stark

May in the Summer

The Vampire Priest in "Thirst"

The Female Shaman in Bless me Ultima

A Discovery of Witches

8 Ways to Say I Love My Life

Punk Meets Pedophile: The Girl Who Played With Fire

The Girl With the Dragon Tattoo

Let the Right One In

When Alma flees with her young lover to Texas to escape an arranged marriage with a much older man, she sets in motion a drama that will put the sisters and their legacy at risk.

Pilar, a 14-year-old tomboy, is offered as a replacement bride, and what follows is a sensuous courtship and marriage clouded by the curses of her husband’s former lover, Consuelo. She will stop at nothing, even the use of black magic, in her effort to destroy the Sandoval family.

The Mexican-American war begins and the Americans invade Santa Fe.  The sisters survive the hostilities from two important fronts-New Mexico and Texas.  Their money and ancient knowledge offer some protection, but their lives are changed forever. 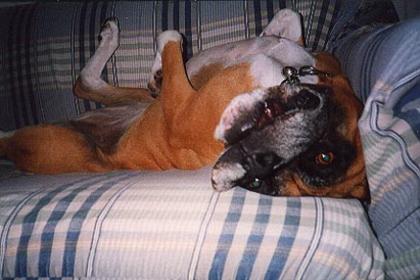 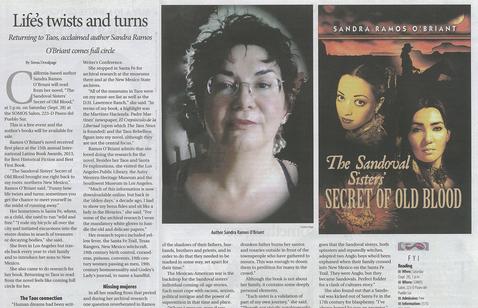 Published excerpts from The Sandoval Sisters' Secret of Old Blood:

The Devil at the Dance, an excerpt from the original novel, appeared in La Herencia, vol. XXXV, Fall 2002, (Gran Via, Inc.), and was subsequently online at latinola.com.

Of Nuns and the Demimonde appeared in altered form on FriGG (summer, 2004).

The First White Woman appeared in The Copperfield Review, (Fall, 2004).. 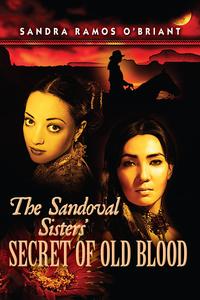 The Irish in me at Irish Writing

Writers of the West

In NY for AwardsSee if you can find me!

Her Life in Bed, appeared in Pilgrimage Journal. 2015, and on my blog. Link below.

Chile Tales in What Wildness is This (University of Texas Press, 2007), reprinted in Pocho, 2013.

​This Is Not a Dog Story

​Her Life in Bed

​The Tattoo Lady, Mother and Me

The Mothers of Invention

Childhood Influences: Where Ideas Are Born

How I Became Me and Not Her

Stuck in Time: Forgetting and Forgiving

Girlfriends: The Other Women

Bye Bye Black Sheep: When Your Mother Makes You the Enemy

Hellfire of the Vanities: Confessions of a Latina Redneck

The Poop of the Matter

Minnesota on a Stick